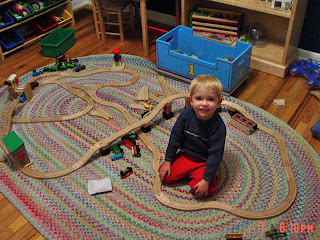 Heidi Ashworth from Dunhaven Place tagged me several days ago with the 6th Folder 6th Photo Tag. Â I’m not very organized so it took me awhile to figure out where all my photo folders actually are!Â

This was taken in June of 2002. Â When my eldest child turned two we jumped on the Thomas the Tank Engine bandwagon. Â He LOVED those trains!
I’m tagging AlicesonÂ Â and La MomÂ or anyone who wants to take a shot at it!
Logging In...