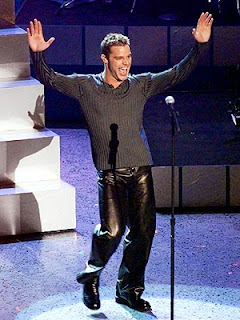 I love Ricky Martin, I love his bon bon and I love that he chose social media as the vehicle to let the world know that he is a homosexual, announcing on his blog and via twitter “I am proud to say that I am a fortunate homosexual man. I am very blessed to be who I am.”  I’m pretty sure I’m not the only fan that tried to stifle the word “really?”… NOT.  Ricky, honey, growing up in the arts, being turned down by all of my gay crushes… let’s just say that my gaydar is well trained and I’m so happy we can stop trying to fool one another.

Ricky writes, “Many people told me: “Ricky it’s not important”, “it’s not worth it”, “all the years you’ve worked and everything you’ve built will collapse”, “many people in the world are not ready to accept your truth, your reality, your nature.”

Is this still the reality?  Do you think we’d all have been “Livin’ La Vida Loca” if we knew Ricky was gay?  UH HELLO …. we all knew.  So YAH, I’d have to say yes, for me anyway.  I have to hope that tolerance grows over time and that people like American Idol, Adam Lambert, who took a little less time (several years less) than Clay Aiken to stop playin’ games, will pave the way and show artists that their real fans love them even if the chance of having dirty sex and bon bon lovin’ doesn’t exist.  Because we all know that if Ricky weren’t gay he’d soooo be my boy toy.  Just sayin’